Loughborough University’s Elite Athlete Centre and Hotel (EAC) has supported its first Mount Kilimanjaro challenge to help a group of women to scale the rooftop of Africa for charity.

The sports-specialist hotel provided the group with a tailored package weekend aimed at boosting their performance both physically and mentally ahead of the 7-day trip.

It is the first time the hotel has trialled this specific package and more packages are due to be launched in the near future.

During their stay, the women spent time with academics from the university and were given expert performance tips to cope with scaling the mountain. The group also had access to a range of world-class facilities.

This included sleeping in the hotel’s altitude bedrooms to help them acclimatise to the conditions they would experience on the mountain, a training session in an altitude chamber, a nutrition and physiology lecture, and a strength and conditioning session.

One of the members of the group who took part in the challenge was Mandy Hickson, a former RAF pilot who was only the second woman to fly a Tornado GR4 on the front line.

Mandy said: “The training at the hotel helped immeasurably. It calmed many of the fears and concerns that the team had.

“Being able to talk to experts in the fields of nutrition and physiology and understanding what would be happening to our bodies at altitude was very powerful.

“The fact that we completed the weekend training as a group allowed us to bond before heading out on the trip and this had such a positive impact on us.”

The women, who were nearly all novices, climbed for an average of 7-8 hours a day to reach the 19,341 ft summit of Mount Kilimanjaro called Uhuru Peak. 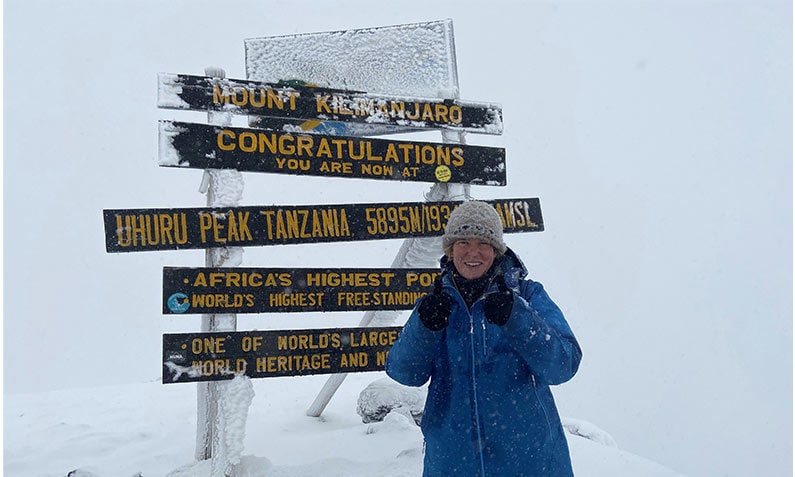 The group endured temperatures as low as -10 degrees and battled with sickness, headaches, and lack of sleep.

Mandy, who has completed three tours of duty and 45 missions over Iraq, said: “This was an experience like no other I have ever encountered.

“We were all incredibly fit, had completed as much training as we could, and although we had experienced an altitude chamber before our trip and sleeping at 3200m in the bedrooms, nothing could quite prepare you for the shortness of breath and altitude sickness that many of the group suffered from.

“The one team ethos and camaraderie with not just the climbers, but with the Tanzanian Sherpas and guides was extraordinary. We would be often welcomed into camp with a wave of African voices, singing us in after a long day.

“The summit night was incredibly challenging, in the most extreme weather that many guides described as the worst they had encountered in 20 years.

“We all stuck together and going ‘pole, pole’ which means ‘slowly, slowly’ 15 of us reached the summit after a gruelling 8 and half hours climb in a snow blizzard from basecamp.”

Emma Boynton, Head of Sales and Marketing at Imago Venues, said: “Our altitude packages have been designed for anyone looking to embark on high altitude expeditions. "Far from being aimed at just elite athletes, our unique altitude bedrooms and access to world-class physiology and nutrition make elite-level preparation available to totally 'ordinary' people who want to challenge themselves to achieve something great. "We’re thrilled that Team GC came to stay with us before their expedition and we’re proud to have had a positive impact on their preparation – well done to Mandy and the girls."

The trip - organised by Team GC and 360-expeditions - raised money for numerous charities, including Winchester Hospice and The Murray Parish Trust.